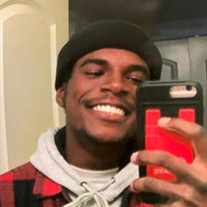 Devante’ Marquise Nichols, was born on September 8, 1996 at Christiana Care Hospital, in Newark DE. He departed this life at his home in Elsmere, Delaware on November 29, 2020. He received his early education in the public schools of Delaware, West Virginia, and Texas. He graduated from Newark High School in June of 2016 in Newark, Delaware. After graduating from high school, he worked several jobs. He was working at the Wilmington Youth Rowing Association as the Head Coach for the Varsity Men’s until his passing. During the summer of 2011, he attended the Row For It program for a summer camp at the Wilmington Youth Rowing Association, where he developed an interest in rowing. In the Spring of 2012, he was voted Novice of the Year and quickly became the Captain of the Men’s Varsity Team in the following fall. For the next four years, he led his team to multitude of victories in all competitions that his team entered. He had the opportunity to compete at the U.S. Rowing Youth Nationals each year that he competed. Devante was an artist, loved music and even purchased a bass guitar. He was also an avid skateboarder, collected "dad” hats, and formed a dance group with his friends called Trifold. He and his group created multiple dance videos that are posted on social media. He was a natural leader, mild mannered and kind. He made friends easily and has several lifelong friends. He was witty and liked to joke around. He loved his family and adored his niece and nephews. He captivated everyone with his infectious smile. Caring and thoughtful, his family was always on his mind. He always ended every conversation with “I love you.” As an amazing son, remarkable brother, and a great uncle, his love is unmatched, and he is already greatly missed. A life without his kind heart and not having the ability to share future moments and achievements is hard to accept. He joins his niece, Cheyenne Lauren Nichols at our Father's side in Heaven. He leaves to cherish his memories, his Mother, Teresa Nichols, three brothers: Kenneth, Devon, and Deveraux Nichols, three sisters: Danielle, Christina, Tiana Nichols one niece, Le’Asia Nichols, four nephews: Christian and Ethan Gibbs, Tristan Nichols and NyFesse Tucker, Jr. . He leaves his memory to many and will be missed by us all.

Devante&#8217; Marquise Nichols, was born on September 8, 1996 at Christiana Care Hospital, in Newark DE. He departed this life at his home in Elsmere, Delaware on November 29, 2020. He received his early education in the public schools of... View Obituary & Service Information

The family of Devante M Nichols created this Life Tributes page to make it easy to share your memories.

Devante’ Marquise Nichols, was born on September 8, 1996 at Christiana...

Send flowers to the Nichols family.