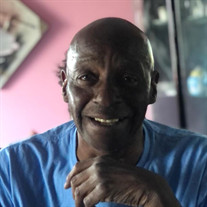 David F. Thompson.: Born May 28, 1953 in Bridgeton, NJ to parents, Melvin L. Thompson, Sr. and Dorothy Thompson. Even though David was born in NJ, he was raised in Wilmington, DE by his mother’s sister, Elizabeth. When David was 15 years old he left Delaware and moved to Newark, NJ where his mother and most of his siblings resided. When David was in his early 20’s he got a job working at Planned Parenthood of NJ. In a short period of time, David was promoted to director. No matter what type of employment he had, he always worked hard and excelled. After living in NJ for many years, he eventually moved back to Delaware. He began working at Pathmark which is where he met his future wife, Shirley. After he left Pathmark, he went to work for Crystal Inn where he worked for 6 years. His last place of employment was at Towne Place Suites in Newark, DE where he worked for 16 years. David and Shirley were married on August 24, 2002. David was truly blessed to have Shirley as he couldn’t have had a more devoted and committed wife. David was very committed to his family. He especially adored and enjoyed spending time with his grandchildren, Latayah, Rashiyah, Nariyah, and Rashad Jr. David also enjoyed cooking and watching television. He also had a great love for cooking and eating. David was preceded in death parents, Melvin and Dorothy Thompson. David leaves to morn his beloved wife of 20 years Shirley Thompson; his children: Kim , Yolonda, Mark, Dwayne, Akia, and Natasha, son-in-law Roddy Rashad; preceded in death David, Jr., siblings; Mary Armstead, Rosemary Stevens, Sherry Forney, Sharon and LeMaurice Thompson and brother in-law Carl Royster . Preceded in death siblings: Eugene, Melvin (aka June), Larry, Kim, Jimmy and Noah. David was blessed with 22 grandchildren, 9 great grandchildren, nieces, nephews, cousins and a host of other relatives and friends.

David F. Thompson.: Born May 28, 1953 in Bridgeton, NJ to parents, Melvin L. Thompson, Sr. and Dorothy Thompson. Even though David was born in NJ, he was raised in Wilmington, DE by his mother&#8217;s sister, Elizabeth. When David was 15... View Obituary & Service Information

The family of David F Thompson created this Life Tributes page to make it easy to share your memories.

Send flowers to the Thompson family.