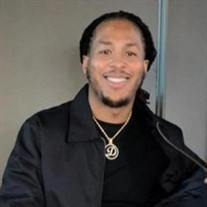 Dave'on Jamaar (Fountain) Rogers-Miller aka Mr I-95 and D. Roge, son of Janean Rogers and David Miller, accepted his invitation to be with the Lord on May 1, 2022 at the young age of 25. Dave'on was born on December 25, 1996 and received his early education in the public schools of Wilmington, Delaware. He attended Prestige Academy where he enjoyed playing basketball and connected with life long friends Isaac (Stay The Night) and Kashawn (Kush). He was given the name "Too Tall" by his coach and teammates. On June 6, 2016 Dave'on proudly graduated from Newark High School. After graduating high school he jumped right into the workforce. Dave'on was employed with K-Mart, Wal-Mart, Goya, Rastelli and Kohl's After working for these companies, Dave'on developed a strong entrepreneurial passion to become self-employed as a long haul driver who transported vehicles across the United States. On May 1, 2022 Dave'on's entrepreneurial passion became a reality. He received his LLC licensure in transportation to start his business. Dave'on was a family oriented person. He enjoyed attending family gatherings and taking pictures with everyone. He had a smile that would light up a room and a heart of gold. Dave'on was genuinely loved by everyone. Dave'on didn't hesitate to help anyone in need. He would give you the shirt off his back. Dave'on never met a stranger. Almost everyone was family or a friend. Dave'on was a prankster with an unforgettable laugh. Dave'on enjoyed working out in the gym and getting his cars modified with rims, sound systems and new paint jobs. You would hear him before your saw him. Dave'on loved music, even thought he had two left feet. Dave'on was a proud memer of "The Skaing Bandits9" which consisted of Dave'on, Tah'mere and Quadiare (Fatman) who were more like brothers than cousins. Dave'on's favorite color was red and he enjoyed watching educational documentaries,. Dave'on was a fashionable dresser and no outfits were complete until he placed his untied Air Ones on his feet. If you didn't know him, you'd think those were the only shoes he owned. Dave'on had a strong bond with his mother, Janean from birth. he was her defender, protector and sometimes thought he was her father. Dave'on was an awesome big brother. He loved being a big rother to his sister Darionna. He would often tease her saying she couldn't date until she's about 50. On July 21, 2020 Dave'on became a proud girl dad. As a first time father, he didnt shy away from his responsibilities. Dave'on embraced fatherhood. Dave'on was proud of his one and only daughter De'Vei and enjoyed showing off her pictures and sharing stories of her latest milestones or antics. She truly kept him on his toes. Dave'on willing accepted parenting advice and had big plans for Da'Vei's life and future. Dave'on would never tell you goodbye.. see you later. Dave'on was preceded in death by his grandparents the late Ernest and Elwood Hudson. Dave'on leaves to cherish his loving memories to his one and only loving daughter Da'Vei Jhene Rogers-Miller and Jaylin Fowler (his daughter's mother); parents Janean Rogers and David Miller, his sister Darionna Rogers-David; great grandparents Sandra Callahan-Rogers, Martin Taylor and Willie B. Harris; grandmother Dollicia Rogers, Aunt's Orena Smith, Demona Lucas, Nastassica Rogers, Dollicia Rogers, Timiasha Rogers and Charlene Kent. Uncle's Desmond Rogers, Lavarr Rogers, Jamar Rogers and Darnell. A host of cousins, aunts, uncles and devoted friends.

Dave'on Jamaar (Fountain) Rogers-Miller aka Mr I-95 and D. Roge, son of Janean Rogers and David Miller, accepted his invitation to be with the Lord on May 1, 2022 at the young age of 25. Dave'on was born on December 25, 1996 and received his... View Obituary & Service Information

The family of Dave'on Rogers-Miller created this Life Tributes page to make it easy to share your memories.

Send flowers to the Rogers-Miller family.