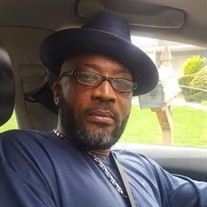 Darrin E. Mitchell, son of Janie M. Smith and Roy E. Mitchell, was born on December 6, 1965. He was raised in Philadelphia, PA, where he attended public school. Darrin’s natural intellect allowed him to excel in school with minimal effort. He was baptized and gave his life to the Lord at an early age at New Psalmist Baptist Church in North Philadelphia. Darrin played football and basketball for neighborhood youth leagues and his high school. He graduated from Murrell Dobbins Career and Technical High School in 1983. On September 5, 2010, he was united in holy matrimony to his soulmate, Catrena Sampson. Darrin and Catrena’s unconditional love for one another was evident by the way they cared for each other, their children, and their grandchildren. Darrin loved driving and excelled as a professional driver. After obtaining a CDL, he drove local runs and cross-country for many companies – including Dunkin Donuts – until he opened his own company. Darrin and his wife Trena opened D and C Trucking in 2014. They made many cross-country trips together and employed their sons. He used his love for driving to provide for his family and was known to help family and friends with moves or long-distance trips. He recently helped his niece and nephew move to college, driving the majority of the 18+ hours trip without complaining. They just had to listen to his singing. And we all know he was a great singer! Darrin will always be remembered for his humble spirit, infectious smile and laughter, cunning wit, humorous antics, and loving advice. He used his struggles in life to encourage and educate others. Darrin always had a joke, a funny story, or well-thought-out words for every situation…even if he had to create new words or the actual story. His children and grandchildren will miss traveling and weekends at his New Castle, DE home. Darrin was preceded in death by his bonus dad, Walter R. Smith. He leaves to cherish his memory: his wife Catrena Mitchell; his mother, Janie Smith; his mother-in-law, Bertha Sampson; his four children, Lashay Childs, George Dudley, Darrin Mitchell, and Sanaa Mitchell; his son-in-law, Craig Rider; his 11 grandchildren, Kalia Rider, Kaya Rider, Camron Rider, Janiyah Singleton, Darrin Mitchell, Sahirah Mitchell, Sasha Mitchell, Kimora Veney, Logan Mitchell, Tru Veney, and Saida Dudley; his Smith siblings; his Ezell siblings; his godmother Dorothy Johnson and a host of in-laws, aunts, uncles, nieces, nephews, cousins, and friends. DARRIN will always live in our hearts. Lovingly Submitted, The Family

Darrin E. Mitchell, son of Janie M. Smith and Roy E. Mitchell, was born on December 6, 1965. He was raised in Philadelphia, PA, where he attended public school. Darrin&#8217;s natural intellect allowed him to excel in school with minimal effort.... View Obituary & Service Information

The family of Darrin Edward Mitchell created this Life Tributes page to make it easy to share your memories.

Send flowers to the Mitchell family.