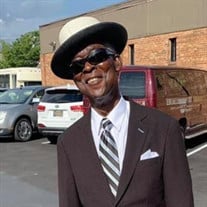 Clinton “Clint” Moultrie, 75, of New Castle, Delaware, passed away peacefully on March 11, 2022, surrounded by his loving family. Clint was born the fourth of nine children to the late Wilbert Sr, and Beatrice Smith Moultrie. He was educated in the Birmingham City School System, attended Camel Lane Elementary School, and matriculated to A.H. Parker High School. Clint’s passion for sports started early in life as he attended Negro League baseball games with his father and other family members. After graduating from Parker High School in 1965, at the age of 18, he relocated north to Wilmington Delaware. Clint began his professional career at Wilmington General Hospital before embarking on a 40-year career with General Motors working in various capacities. In May of 1972, he met Zenobia “Nobie” at a party, and they wed in 1977. The two went on to raise three wonderful children, Anthony “Tony”, Sabrina “Brina” and Zenobia “Baby”. He loved the church and loved to tell anyone who would listen about the goodness of the Lord. Clint found great joy in the simple things like family dinners and watching his kids and grandkids dance and play around the house. Clinton was preceded in death by his parents, Beatrice & Wilbert Moultrie Sr., four sisters, Betty Moultrie Abner, Mamie “Baby-sis” Moultrie Lang, Deloris “Lois” Moultrie, Emma Moultrie and one brother, Walter J. “Billy” Evans. He is survived by his wife, Zenobia C. Moultrie, son, Anthony (Alisha) Stevens, daughters, Sabrina (Chris) Purnell, Zenobia (Jason) Moore, 10 grandchildren, 3 great-grandchildren, three sisters: Thelma “Brown” Lee, Theresa (Tim) Douglas, Sebrina (Bernard) Wilson, one brother Wilbert” Sugar” (Jackie) Moultrie, and host of family and friends. Clinton was a loving husband, father, grandfather, uncle, nephew, cousin, and friend. A common theme that prevailed in every aspect of his life was his relationship with God, love for his family, and being consistent for others. Exodus 23:20 “See, I am sending an angel ahead of you to guard you along the way and to bring you to the place I have prepared.”

Clinton &#8220;Clint&#8221; Moultrie, 75, of New Castle, Delaware, passed away peacefully on March 11, 2022, surrounded by his loving family. Clint was born the fourth of nine children to the late Wilbert Sr, and Beatrice Smith Moultrie. He... View Obituary & Service Information

The family of Clinton Moultrie created this Life Tributes page to make it easy to share your memories.

Send flowers to the Moultrie family.