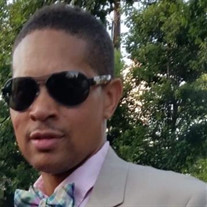 Christopher S.H.Roberts Sr. son of Marie Roberts and the late Ronald Roberts Sr. was born on December 31, 1965, in Philadelphia, PA. He peacefully went to sleep on Tuesday, April 3, 2019, at his residence in Middletown DE with his family, and dear friends at his side. Chris Sr. received his early childhood education at Larchwood SDA Church in Phila.PA and in 1983 graduated from John Bartram High School in Phila.Pa. In 1990, he was united in marriage to the late Lenetta A. Roberts and from this union three loving sons Chris Jr., Khai, and Kameron were born. He also has a loving daughter named Kyra. Chris Sr. worked hard to provide for his loving family. After high school for 14 years, he worked at Pennsylvania Hospital and S.E.P.T.A. and other secondary jobs before his employment with the State of DE as a Correction Officer in 2015. Even though his difficult days, Chris Sr. never slowed down and continued to fulfill his duties as assigned. His pride and stubbornness wouldn’t allow him to quit and he would always say “I'm ok” while enduring the pain. Chris Sr. will always be remembered for his love of basketball and teaching his boys how to shoot 3-pointers and the art of defense, Chris Sr. loved children. His mischievous nature, his cologne, his love for expensive cars, LV and Gucci shoes and bringing life to all family events and vacations will be sorely missed. Oh! Do not forget his cooking! Everyone knew the party didn’t start until he arrived. His dad, Ronald Roberts Sr. and his wife Lenetta A. Roberts preceded him in death. As a loving father, he leaves to live on his legacy “His Boys” Chris Jr(Dude), Khai(KhaiZilla) and Kameron(Mudi) and daughter Kyra. His mother, Marie Roberts, his right and left pillars of support Marie, Alonzo, Ron Sr., Esther(David Sr), Janel(Eric Sr) and Jarek(Lori). His nephews Ron Jr., Malik, and Eric C. His nieces Cree, Dominik, Tasha, Jade, Kristen, Sable, Delia, Erin, and Anissa. His Cuzin Raby who gave him the name “Dusty”, Sister-in-Law Diana(David), and a host of aunts, uncles, cousins, and friends he called his family. He leaves his fiancée Latoya Emmens(her sons Tahiem and Tahmir)who was there by his side encouraging him to stay strong. Jefe’ will always live in our hearts forever

Christopher S.H.Roberts Sr. son of Marie Roberts and the late Ronald Roberts Sr. was born on December 31, 1965, in Philadelphia, PA. He peacefully went to sleep on Tuesday, April 3, 2019, at his residence in Middletown DE with his family, and... View Obituary & Service Information

The family of Christopher S H Roberts Sr created this Life Tributes page to make it easy to share your memories.

Christopher S.H.Roberts Sr. son of Marie Roberts and the late...

Send flowers to the Roberts family.