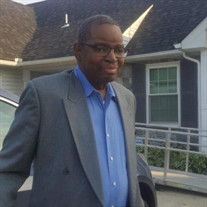 It is with great sadness that we announce the death of Charles Earnest Dillard, which occurred on April 30, 2021. Charles was the youngest son of George, and Ursula Dillard. Charles was born on April 14, 1948 in Philadelphia, Pennsylvania. He was a loving husband to Faith, and father to three sons; Eric (Shaheed), Ernest (Lateef), Edward, and an adopted daughter Andrea. After being childhood friends, Charles and Faith started dating in 1964, and were married on September 9, 1967. After graduating from Overbrook High School in 1965, Charles joined the U.S. Air Force. He served for four years, and one was a tour in Vietnam. After leaving the Air Force in 1970 with an honorable discharge, Charles served two years in the U.S. Army. During his military career, he earned the rank of Sergeant. He also received many awards including the Vietnam Service Medal, Small Arms Expert Marksmanship Ribbon, Air Force Good Conduct Medal, National Defense Service Medal, and the Republic of Vietnam Campaign Medal. Charles took pride in being a good father, and did the utmost to provide for his family. It seemed that no matter where Charles went, he was lauded for his hard work ethic, and high moral standards. After leaving the Military and holding several jobs, Charles gained employment with the Pennsylvania Railroad as a clerk typist. He also worked at Conrail and Septa before landing at Amtrak. He started as a Clerk Typist, moved to a Mail Carrier, and was finally able to train as a Locomotive Engineer. While at Amtrak, he was promoted to an Assistant Transportation Manager, then to a Transportation Manager at the new station in Pittsburgh. After discovering that voluminous paperwork was not his cup of tea, he went back to being an engineer. He retired from Amtrak in 2002, after being diagnosed with an Agent Orange related brain tumor. Charles thoroughly enjoyed spending time with his family, going to church, reading the bible, Eagles football, singing, going to the beach, listening to music, and going out to eat with family. He became a member of the True House of God in 2002, where he became an Elder. Charles, known as Dad to everyone, endeavored to be a great father and husband. There are many great things to say about Charles as a Man of God, husband, father, and person. His life has been a prime example of how one should live, and lead a family. Charles was proceeded in death by his parents George and Ursula Dillard, his oldest brother George E. Dillard, and granddaughter Shanee Hargrove. He is survived by his devoted wife Faith Dillard, sons Eric "Shaheed"(Renee), Ernest "Lateef", Edward (Seleena), his adopted daughter Andrea (daughter), as well as grandchildren, great-grandchildren,,sisters-in-laws, brothers-in-laws, cousins, nephews, nieces, and oldest brother and life long friend Stanley P. Dillard Sr.

It is with great sadness that we announce the death of Charles Earnest Dillard, which occurred on April 30, 2021. Charles was the youngest son of George, and Ursula Dillard. Charles was born on April 14, 1948 in Philadelphia, Pennsylvania.... View Obituary & Service Information

The family of Charles Dillard created this Life Tributes page to make it easy to share your memories.

It is with great sadness that we announce the death of Charles...

Send flowers to the Dillard family.