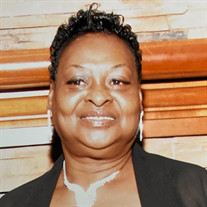 Beulah Alverna McManus, daughter of the late Ella and George McManus, Sr., was born on November 27, 1949, in Wilmington, Delaware. She entered into eternal rest on Tuesday, October 19, 2021, at home. Beulah, (affectionately called Beau) was educated in the Wilmington Public School System, graduating from Wilmington High School. After graduation she enrolled in the Medical Assistant training program at the Delaware Hospital. She often shared with family and friends that one of the most rewarding experiences of that career was caring for Hunter and Beau Biden during their hospital stay following their car accident. She often recounted how caring and personable Senator Joe Biden was during that time. She remained in that position for 12 years. Beulah would later be employed by S&R Management, a division of Brooks Armored Car Service, as a money boxer. She had lots of stories about her time there, which kept us laughing for hours. Beulah was a hard worker for which she was recognized on many occasions. She was persistent in her determination to accomplish her goals, sometimes holding down two jobs in order to reach those goals. She retired after 35 years of service. To know Beulah was to love her, she had a beautiful, bubbly personality and was completely genuine. She didn’t hold back on giving you her opinion, she said what she meant and meant what she said. Beau had wisdom far beyond her years and she shared that wisdom often. When meeting someone for the first time they often said that she made them feel so comfortable, as if they had known her for years. Her laughter was contagious and no matter what life sent her way, she could always find positivity in every situation. If you gave her lemons, she would make lemon meringue pie. Beau had become a frequent cruiser traveling to such destinations as San Juan Puerto Rico, Cozumel, Key West, Belize, Costa Maya, Falmouth and Ocho Rios Jamaica, Labadee, St. Marten, Nassau, George Town, Grand Cayman, Grand Turk and La Romana. Beulah was a devoted mother, grandmother, great-grandmother, sister, aunt, cousin and friend. She was a caring and nurturing big sister who was a second mother to her three youngest siblings helping to care for them and taking pleasure in letting them know who was boss. Her love was real, whether family or friend, if she loved you, you knew that she loved you. Beulah was preceded in death by her parents, Ella and George McManus, Sr., siblings, George Jr., Ronald, Anthony, Juanita, Marie McManus, and Margaret Terrell. Beulah leaves to cherish her memory a loving family: Devoted daughter, Waheedah, granddaughter Sana’Ja, great-grandson Xylen, children: Jawanna, Jaywon and Nailah; Brothers: Charles (Patricia) McManus of New Castle, DE, Khalil (Patricia) Nuriddin of Newark, DE, Harold (Kendra) McManus of Petersburg, VA; Sister: Romayne Flowers of Washington DC; Devoted nieces: Stephanie Harrison, Teali Moore and Je’Nee McManus; Devoted nephews: Khalil and Anthony Nuriddin, and Pierre McManus; a host of nieces, nephews, great-nieces, great nephews, cousins and friends. Special brothers: Michael Williams and Sir Walter Johnson; Schoolmates Ronnie Dollard and James Dixon; Devoted best friends: Cynthia Righter, Cathy Price, Shirley Wilson, Carmen Anderson and Lois Moore.

The family of Beulah Alverna McManus created this Life Tributes page to make it easy to share your memories.

Beulah Alverna McManus, daughter of the late Ella and George...

Send flowers to the McManus family.