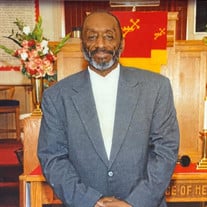 Bernie L. Wilkins was born on March 21, 1943, in Cape Charles, Virginia to the late George and Serita Wilkins, departed this life on Friday, December 31, 2021. Bernie graduated from Wilmington High School in 1961. After high school, he enlisted in the United States Air Force, serving his country as an Airman from 1961 to 1965. In 1966, Bernie attended Delaware State College, (now University), where he was a key player on the men’s basketball team. In 1970, he had the honor of being listed in the “Who’s Who” among students in American Colleges and Universities. He also pledged with Omega Psi Phi Fraternity, Inc. his pride and joy. Bernie graduated from Delaware State in with a 3.1 GPA, earning a BS in Business Administration. After graduating, Bernie became an educator in the Wilmington Public School System for three years. After his teaching career, he was employed by DP&L as an Account Specialist for two years; Proudfoot Company as an Account Executive, traveling the United States for four years; Kingswood Community Center as a Youth Coordinator for six years; Neighborhood House as a Youth Coordinator for 25 years; and Children and Families First, servicing the Department of Corrections’ Plummer Center and the Hazel Plant Women’s Facility until his retirement. In 1994, Bernie founded the Delaware Juneteenth Association after a trip to a conference where Juneteenth was celebrated yearly. After returning to Wilmington, he decided that it was time for all Delawareans and people across the globe to know the history of Juneteenth and the celebrations began. With the hard work and dedication of establishing motivational community involvement, the team and Bernie worked tirelessly to establish the Delaware Juneteenth Association. In 1999, Bernie joined New Calvary Baptist Church, and was later baptized on April 25th. He then became a Deacon under the leadership of Rev. Dr. Vincent P. Oliver. He served diligently until his illness. Bernie served on the Scholarship Ministry and as a member of the Music Ministry, singing on two choirs. In 2000, along with Bernie to name a few, were former Governor Tom Carper (who signed legislation as a day of observance), former State Senator Margaret Rose Henry, Sandy Clark, Brenda Gunter, Sylvia Lewis-Harris, Nancy Taylor, Bea Carroll Dixon, Kwame Ray Jackson, the late Regena Manley and countless other individuals made his dream a reality. They were the reason we celebrate Juneteenth in Delaware. On June 17, 2021, President Joseph R. Biden signed legislation establishing Juneteenth as a national holiday and on October 27th, our own Governor John Carney, signed legislation making Juneteenth an official holiday in the state of Delaware. A scholarship was created at his Alma Mater, Delaware State University. Each year deserving students in Business Administration receive assistance from the Delaware Juneteenth Association, in his honor. Most recently, Bernie was nominated for a Community Service Award from Alpha Kappa Alpha Sorority, Inc. Zeta Omega Chapter. Bernie leaves to cherish his memory his devoted wife of 48 years, Karen (Ivory) Ellis-Wilkins; Daughters: Shannon McCartney of Lake Charles, Louisiana and Kim Collins of Delaware; God Daughters Niani Ellis-Powell and Ki’Yah Ellis-Jackson; one brother-in-law, Tommy (Donna) Ellis; three sisters-in-law, Jean Hill Williams, Cheryl V. Ellis, and Cassandra (Neecie) Price; devoted grandchildren, great and great-great grandchildren; and a host of cousins, nieces and nephews.

Bernie L. Wilkins was born on March 21, 1943, in Cape Charles, Virginia to the late George and Serita Wilkins, departed this life on Friday, December 31, 2021. Bernie graduated from Wilmington High School in 1961. After high school, he enlisted... View Obituary & Service Information

The family of Bernie L Wilkins created this Life Tributes page to make it easy to share your memories.

Send flowers to the Wilkins family.