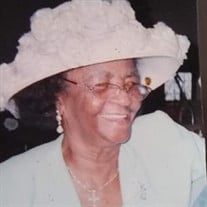 Asaneth "Olga" Fullerton-Hightower received her wings on April 12, 2019 in Claymont, DE at the age of 80. Ms. Hightower was born on August 25, 1938 in Brownstown, Jamaica to her parents, Doris Grant-Fullerton and Sydney Fullerton. She was a nurse in the Pennsylvania area hospitals before her retirement. She married Kenneth Hightower in Jamaica on September 04, 1966. After coming to America, Olga became a dedicated member of the New Bethel church in Chester, PA. She became an Honorable member in 1972 where she worked alongside her husband and the Bishop to build the church. Her husband, Kenneth, was on the Deacon Board and she became the Mother of the church. Her many duties were Pulpit Aid, Trustee Board, Gospelers Chorus member, Kitchen committee. She attended until her health started to fail her. Ms. Hightower was a patient and supportive nurse with a passion for helping others. She loved working with children. She will be remembered by her colleagues as an exceptional nurse at Crozer, Taylor Hospital and nursing homes, and as someone who set the standard for patient care. Friends say she was kind, compassionate, and driven. Ms. Hightower is preceded in death by her loving husband, Kenneth C. "Lumps" Hightower, Brother Carl Fullerton and Sister Inez Fullerton- Johnson. She is survived by her brothers Noel Fullerton (Clair) in London, England, Aston Fullerton in Houston, Texas, Desbert Fullerton (LaVern) in Wilmington, DE, Winston Fullerton in Brownstown, Jamaica, Sisters Merlin Robinson in Chicago, Illinois, and Phancia Thorpe (Tom) in Bear, DE, a host of nieces, nephews and God Children, and other family members and friends.

Asaneth "Olga" Fullerton-Hightower received her wings on April 12, 2019 in Claymont, DE at the age of 80. Ms. Hightower was born on August 25, 1938 in Brownstown, Jamaica to her parents, Doris Grant-Fullerton and Sydney Fullerton. She... View Obituary & Service Information

The family of Asaneth Hightower created this Life Tributes page to make it easy to share your memories.

Send flowers to the Hightower family.