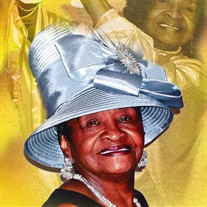 Anna M. Lambert, New Castle, DE - formerly of West Chester PA, transitioned to heaven Wednesday, Nov. 13, 2019, at 86 years of age. She was full of life, love, and fun! As a child she loved the arts and continued them throughout her adulthood in singing, dancing, sewing, cooking, and even her incredible style of dressing! She accepted Jesus at a young age and over the years became a dedicated member of various churches including, Star of Bethlehem, St. Johnʼs, Alpha Baptist, Victory Christian Fellowship and in 2012 Ezion Fair Baptist Church, where she was a Mother and part of the Golden Angels dancers. She networked with a plethora of churches and agencies throughout Wilmington and New Castle County to provide services for its residents. She enjoyed a great education at Absalom Jones, and Howard High Schools, and later furthered it at Delaware Technical and Community College, and University of Delaware. She was instrumental in helping to develop the Headstart program for children, and even named the program. She gave as much enthusiasm and energy in counseling adults as she did with instructing children. Her social services work for the State of Delaware at Belvedere, DeLaWarr, Northeast, and Porter State Service Centers was exemplary. She was recently honored at Belvedere Day by the community, and given an award from the Mayorʼs office for her humanitarian services! Anna is the daughter of Evangelist Mabel Reed (deceased) and step- daughter of Fred Reed (deceased). She is the sister of Mary Hawkins (deceased), and sister/cousin of Doris Lambert. Her marriage to Donald Lambert Sr. produced five children: Donald Lambert Jr. (Reaneeʼ), Anita Hopes, Stanley Lambert Sr., Malinda Lambert, and Anthony Lambert; Grandchildren: Donald Lambert III, Albert Hopes III, Michael Lambert (Aniqueca), Sherina Hopes-Osagiele, Anika Lambert, Ryan Lambert, Raymond Lambert (Danielle), Stanley Lambert Jr., and Faith Lambert, and Great-grandchildren: Shayla Hopes, Amaris Osagiele; Xayre, Nyel, Ryah, Donald IV, Minigueca, Mika (deceased), Michael Jr., Niko, Aliya, Raymond Jr., Miles, and Colin Lambert; Aireane, and Aniya Lambert. Mother Anna Lambert, we salute you for a job well done!

Anna M. Lambert, New Castle, DE - formerly of West Chester PA, transitioned to heaven Wednesday, Nov. 13, 2019, at 86 years of age. She was full of life, love, and fun! As a child she loved the arts and continued them throughout her adulthood... View Obituary & Service Information

The family of Anna M Lambert created this Life Tributes page to make it easy to share your memories.

Send flowers to the Lambert family.