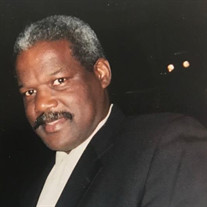 ANDRÉ VINCENT FISHER was the son of the late English W. "Bouie" Fisher and the late Peggy Lou Ricks-Fisher. He was born and raised in Philadelphia, Pennsylvania on November 16, 1956 at Temple University Hospital. He was the sixth of eight children. He remained in North Philadelphia for his early years of life until he joined the family in New Jersey in the early 2000s. He attended Gesu Catholic Grammar School at 17th and Girard Avenue and Our Lady of Mercy at Broad and Susquehanna Avenue where he graduated from eighth grade. Following graduation, he attended Roman Catholic High School at Broad and Vine Streets where he played the trumpet in the band and was on the football team. After graduating from Roman in 1974, he attended Lincoln University in Oxford, Pennsylvania where he majored in Business Administration. André pledged the Omega Psi Phi Fraternity, Beta Chapter and was initiated on October 29, 1976 as a brother of the “Futuristic Five 5-B-76.” He remained an active and loyal member of the fraternity until his death. André displayed a strength that was unmeasurable by overcoming some difficult times in his earlier life. André had a fondness for business. As a young boy, he was often teased and called Ebenezer Scrooge because he kept, held and slept with the first penny he had ever received from his mother until his hand turned green. He managed the GoodDeal Transmission shop his father owned located at 55th and Chestnut Streets in West Philadelphia. He later joined his father Bouie and younger brother, James Akhir in the world of professional boxing as an assistant to the manager and trainer. This position gave him the opportunity to travel among many notable people in the sports arena as well as those in the community at large. André enjoyed being around people regardless of their ages. He enjoyed practical jokes and talking with his friends on a hot summer night while sitting on the steps on Ingersoll Street. His humor will be sadly missed. André was devoted to his family. The special gift of his daughter, Nicole changed his life. His life changed again with the gift of his grandson, Asa. He relished his title of “Uncle André.” As each niece and nephew and grand niece and nephew entered the family, his title of “Uncle André” expanded. He developed a very close bond with his nephew, Qadir helping to support and nourish him in his development as a child and Qadir’s fine arts aspirations. André entered this world in 1956. He was presented to God being baptized in December 1956 at the Gesu Catholic Church. He served as an altar boy. Later in his life he became a member of the Knights of St. Peter Claver, Bishop Herbert A. Bevard Council #342. André was initiated on December 3, 2016. André fought a courageous battle from 2013 until God called him home on April 18, 2018. He is now resting peacefully with his eternal family. He was preceded in death by his loving parents, his grandparents, Anna B. and John W. Jones, and his niece Jasmynn M. Williams. He was devoted to his faith and his family. He was a loving son, father, grandfather, brother, uncle, cousin, and friend to many. Sadly, André leaves to mourn: his daughter, Nicole D. Fisher, whom he loved unconditionally; his grandson, Asa White, who brightened his day; his brothers and sisters, Valerie J. Fisher, Bernadette J. Fisher-Charles (Derek), Bernard J. Fisher, Victoria A. Fisher, Josephine M. Fisher (Mac Palmer), Cecilia M. Fisher-Branham, and James E. Akhir Fisher (Vinette); twenty-seven nieces and nephews. He also leaves: one surviving aunt, Velma Fisher (Robert), and her children, his cousins, whom he held very dear to his heart, a host of other cousins, and many friends. Special brothers and sisters, Reverend Msgr. Federico Britto, Ernie Butler, Anton Hargrave, Cheryl Hollins, Steven Jones, and Cynthia Oakley; his Fraternity Line Brothers, Darryl Hicks, Van Buren Brown, and Alex Rhodan; and brothers of The Omega Psi Phi Fraternity, Inc. Peacefully and Lovingly submitted the family.

ANDRÉ VINCENT FISHER was the son of the late English W. "Bouie" Fisher and the late Peggy Lou Ricks-Fisher. He was born and raised in Philadelphia, Pennsylvania on November 16, 1956 at Temple University Hospital. He was the sixth of eight children. He... View Obituary & Service Information

The family of Andre Vincent Fisher created this Life Tributes page to make it easy to share your memories.

Send flowers to the Fisher family.