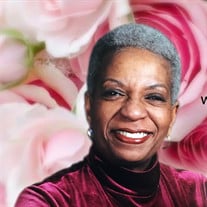 Almana Jones was born August 21, 1946, in Brooklyn, NY to Robert E. Lee Jones and Beatrice Jones (Alexander). She was the youngest child of three children. At a young age Almana was baptized at Concord Baptist Church in Brooklyn, NY, where she accepted Jesus Christ as her savior. Almana's hobbies as a child were the Girl Scouts and "playing teacher." She graduated from New York public school systems and continued her education at Hampton Institute, in Hampton, VA, receiving a Bachelors of Science in Education. At that time she gained the nickname, "Mana," and became a lifelong Pirate. After graduating from Hampton, she moved to Detroit, MI and continued her education at the University of Michigan, receiving a Masters in Education with a concentration in Urban Studies. Mana's professional career began with the Detroit Public School system where she taught thousands of children throughout her 34 year career, in the public school system. She was passionate about education and teaching the inner city youth. After retirement, Mana decided retirement wasn't for her and moved to Winston-Salem, NC. She began a second career in higher education, becoming an instructor at Forsyth Technical Community College in Winston-Salem, NC. She was married to Leonard Wilson and to that union, two daughters, Rachelle and Robyn. As an adult, she was an active member with the Hampton University alumni chapter, serving as president for many years and was an active bowler, in every city she lived in. After her second retirement, Mana continued to be an active bowler, traveled, became more involved in politics and was Go-Go to her granddaughters. Mana leaves behind her legacy to her two daughters, Rachelle Swanson, Bear, DE and Robyn Wilson, Baltimore, MD; one son-in-law, Nathan Swanson, Bear, DE; three granddaughters, Narra Swanson, Emery Swanson and Mayci Swanson; her mother, Beatrice Jones, Queens, NY; sister, Mary Shanck, Queens, NY; one brother-in-law, John Shanck, Queens, NY; and a host of nieces, nephews, and cousins and friends. She was preceded in death by her father Robert Jones and Brother James Jones.

Almana Jones was born August 21, 1946, in Brooklyn, NY to Robert E. Lee Jones and Beatrice Jones (Alexander). She was the youngest child of three children. At a young age Almana was baptized at Concord Baptist Church in Brooklyn, NY, where... View Obituary & Service Information

The family of Almana Wilson created this Life Tributes page to make it easy to share your memories.

Send flowers to the Wilson family.