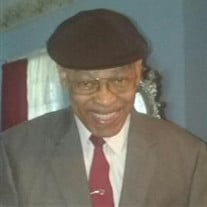 Alfred Bly Sr. was the 11th child born to the late Eva Bly Thomas in the city of Charleston, South Carolina on October 11, 1929. He departed this earth suddenly, but peacefully on May 19, 2017 in New Castle, Delaware surrounded by loving family members. All of his brothers and sisters preceded him in death; loving wife: Goldie Jennie Bly; one son: Vincent Bly; one grandson: Jordan Bly preceded him in death. Alfred, affectionately nicknamed “Sonny Boy” was a happy go lucky, but active child. He was taught in the City of Charleston elementary and high school system. His mother put her child’s active nature to good use when she bought him a little red wagon. With that wagon, young Sonny Boy would run errands for his great grandmother such as taking food to the longshoreman or taking newly washed clothes to the white folks homes. As he matured, his penchant for hard work led him to bussing tables at a local hotel restaurant which eventually led to him becoming a waiter and bartender. He accompanied his mother when she moved to Harlem, New York and finished his high school education at Ben Franklin High School and turned his attention to working full time. He went downtown to the employment office and for $10 or $15 dollars bought a job cleaning movie houses for $40.00 a week. On weekends he and his friends would go the Apollo Theatre and see stars like James Brown or Duke Ellington for .50 cents. One particular summer afternoon he and his friends were at a block party in Harlem. Also at the block party was his brother’s girlfriend Annis Barclift and another young lady he had never seen before. He summoned the courage to ask Annis about the other girl with her. The next day she brought her baby sister Goldie Barclift to formally meet Sonny Boy at his mother’s house. It was love at first sight. Unfortunately, Goldie was still in school and she had to return to PW Moore High School in Elizabeth City, N.C. for the fall. They kept in touch via letters until she graduated in the spring and relocated to New York. It was there in 1952 the courtship began and lasted blissfully until the Korean War began and the United States Military came calling. Alfred was drafted into the army but chose instead to enlist in the Air Force and traveled the world in combat for four years, eventually rising to the rank of Sargent. However, at the beginning of his military service, his friendship with Goldie was in the balance and he had a serious life choice to make. Alfred did not want to lose the love of his life to anyone. So he did what any smart man would do, he asked Goldie to marry him. She said yes. (Thank you Grandma!) From that union six boys were born. Alfred loved his children, often taking them to parks, ballgames, parades and picnics. From his materials and warehousing training learned in the military, Alfred worked many responsible positions in this field and eventually settled on a career within The Gesswein Company in Connecticut and rose to the title of Plant Manager until his retirement. Throughout his young life and later as a married man with children, Alfred has always maintained and gained strength through a non-wavering relationship with God. No matter where he and his family moved, there was always a church to call home. From Mount Olive to Bethel Baptist Church in New York, to Elizabeth City North Carolina’s Corner Stone Missionary Baptist Church under late Pastor’s Dr. John Trotman to the present Pastor Dr. Walter L. Smith Jr. Alfred started his church service as an Usher at Bethel until ordained as a Deacon there and later asked to serve in the same position at Corner Stone until he retired as Deacon Emeritus several years ago. A combined 40 years serving as a Deacon. He continued to sing God’s praises as a member of the Mo-Ray Male Chorus until his health failed him. At 87 years old he continued to attend his beloved weekly noon day prayer service and fellowship with his Corner Stone family. Alfred “Sonny Boy” Bly-A good and spiritual man who served his country, his family and his faith with equal vigor, will truly be missed. Left to cherish his memory are his sons: Alfred Jr., Gerald (Michelle), Steve (Sharon), Kevin (Denise), Bernard (Roxanne); Sister in Law: Mary Barclift; Grandchildren: Lakenya Harrison-Timmons (Jamel), Jermaine Bly, Tiffany Hammouda, Aysia Bly, Marcus Bly, Brandon Bly; Great Grandchildren: Haiti Harrison, London Harrison, Amir Hammouda, and Savyon Walters; a host of nieces, nephews, cousins and friends.

Alfred Bly Sr. was the 11th child born to the late Eva Bly Thomas in the city of Charleston, South Carolina on October 11, 1929. He departed this earth suddenly, but peacefully on May 19, 2017 in New Castle, Delaware surrounded by loving family... View Obituary & Service Information

The family of Alfred Leonard Bly Sr created this Life Tributes page to make it easy to share your memories.

Send flowers to the Bly family.