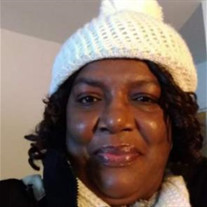 Adina Samuels was born on June 19, 1961 to Peter and Edris Samuels in the beautiful Parish of Dundee, Westmoreland Jamaica. She was the oldest of seven children. Adina was brought up in a Christian home by both parents and she was Baptized at an early age at the Cheviot Hill Bible Way Church. Growing up in the Samuels household and being the child of an Evangelist, not going to Church wasn't an option. Adina was very active in Church where she loved to sing. You could often find her and her sister Winniefred singing duets at other Churches all over the Parish. Adina was a strong prayer warrior and a avid reader of the Bible. Her favorites books of Psalms were 91, and 121 but Psalm 103 was her favorite of all. She strongly believed that God should be the first in everything you do. Education was vital to the Samuels family. Adina attended Dundee Basic school, she then moved to the primary level at Dundee All Age where she completed primary school level until grade 9. Adina completed her education at Cambridge High School in St. James. During Adina's years in school she was a lover of sports, such as long jump and track and field. Adina and her sister Winniefred attended several festival competitions for school including the Jamaica Cultural Development Commission (JCDC). Adina left her family home at an early age to seek employment where she worked for companies such as the Sangsters International Airport and Grace Kennedy Group. She also worked in the hotel industry as a chef as cooking was of her specialties. She enjoyed baking, cooking and making drinks and as Jamaicans would say "tun yuh hand mek fashion". As years went by, Adina established her own business and began selling goods locally. On becoming a mother she always wanted the best for her children, so she migrated to the United States. She lived in South Carolina for a few years then relocated to Delaware. While living in Delaware she decided to return to school where she completed a course in Dental Assistant. It was while living in Delaware she met and fall in love with Mathew Parker. They were married in 2008 and were inseparable until her passing. Mathew and Adina was like Bonnie and Clyde because where there was one there is always the other. Adina loved her children dearly but there was nothing like the love she had for her grandchildren especially when they engaged in multiple conversations. These conversations were like medicine to her soul. Adina was a fun loving person, who had a quiet and cool demeanor and was a family oriented person even though she liked to occupy her own personal space. She was an exceptional woman, wife, mother, grandmother, sister, aunt, cousin and friend. She was caring, helpful and kind. She always dreamed of traveling the world. Adina was preceded in death by her father Evangelist Peter Samuels and mother Edris Samuels, her sister Winniefred Samuels. Adina will be greatly missed by her husband Mathew Parker, her children Cory, Stacy-Ann and Dane. Her step-daughters Tebria and Sonia, grandchildren Shanelle, Conniel, Shanna, Kimora, Nickard (NJ), Devon, D'Angelo and Gift, siblings Peter, Millicent, Joseph, Viola and Anthony, nieces, nephew, and a host of other families and friends. May her soul rest in peace and may light perpetual shine on her.

Adina Samuels was born on June 19, 1961 to Peter and Edris Samuels in the beautiful Parish of Dundee, Westmoreland Jamaica. She was the oldest of seven children. Adina was brought up in a Christian home by both parents and she was Baptized... View Obituary & Service Information

The family of Adina Samuels-Parker created this Life Tributes page to make it easy to share your memories.

Send flowers to the Samuels-Parker family.